Why You Should Visit Digby Neck

Most people don't have a lot of time to spend visiting other places so I'm going to make the case for you using some of that valuable time to visit Digby Neck Nova Scotia.

First, it's the only way you are going to get the chance to visit The Artist's Mark and meet me!

All kidding aside, many people who visit the shop say they are amazed at the quality of our goods and the fact that everything is hand made by professional local artisans. 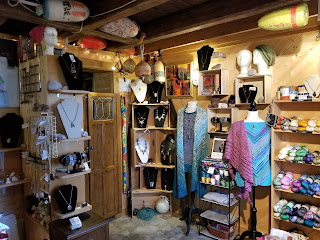 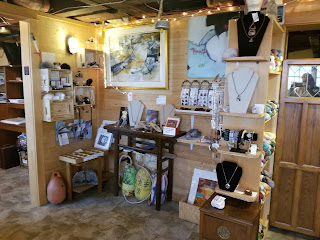 But beyond that, we have an on site professional lapidary shop (and professional lapidary!), art studio and jewelry bench. Families love to see how the various machines work and learn about the local geology and everybody leaves with a beautiful free piece of Digby Neck in the form of a tumbled rock that is over 300 million years old!

However, we aren't the only artists in the area. Digby Neck is dotted with galleries and studios, not to mention the home for the best whale watching around. And driving The Neck is far from a boring experience! Check out this aerial view of the beach and cliffs across the street from our shop. The little house at the end of the beach is ours and here's what it looks like up close. And thanks to Troy and Carmin Cale for sending me these photos! 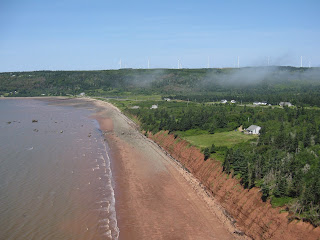 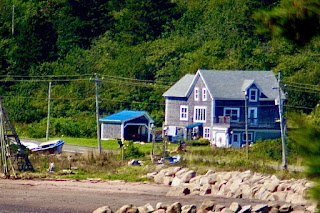 There are misty coves around every corner and the sunsets will take your breath away. 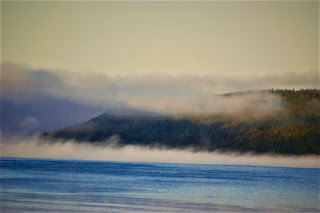 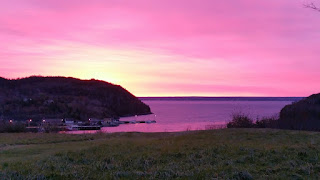 So make plans to visit this truly unique part of Canada's playground. You'll leave with a lifetime of memories for the whole family! 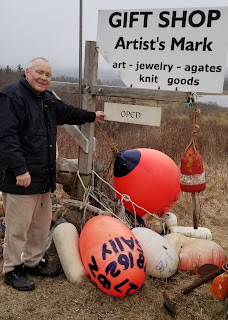 Posted by Peter Turner, lapidary at 10:07 No comments:

Fall Comes To The Neck

Well, another tourist season is drawing to a close and the scene of activity now shifts.

Yesterday, the last stones were groove cut and all the saws, tumblers and wheels have now been drained,cleaned and put to bed. The VT Rock Lab is in hibernation mode. 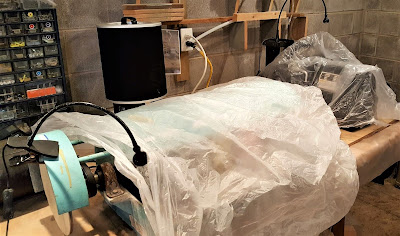 The oil cooled 10 inch saw is in Dartmouth where, hopefully, my talented grandboys will be replacing the neanderthal 1/3 HP motor with a new 3/4 HP beauty and mounting it to a nice laminated countertop piece courtesy of East Coast Countertops. Who knows, knowing them it might come back equipped with bluetooth!

So now is the time when I take inventory of what I need to make over the winter and get to work at my bench in Vickie's studio. 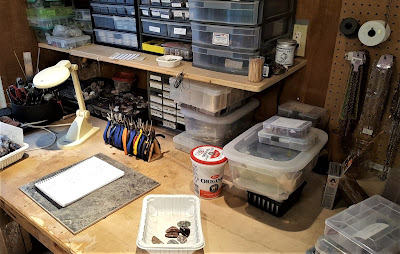 The first priority is to finish some ear ring and ear ring/ pendant sets as I sold quite a few of these over the summer. I get to use this beautiful space as long as I keep my mouth shut and don't disturb the REAL artist. 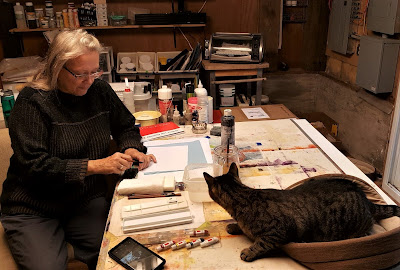 Here she is working under the close supervision of one of the two studio cats (the true rulers of the domain!). And here are a few of the pieces she is working on. 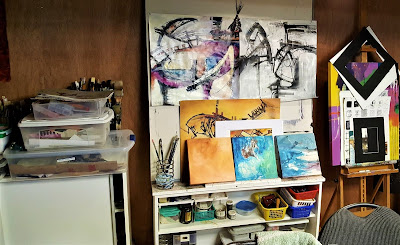 So while it is cold and rainy outside, we are all set for a fun, creative winter inside.

The shop is still open and we still have a good inventory of Seawall Fibres yarn so if you are in the area, come on by!You might want to call first to make sure we are here.
Posted by Peter Turner, lapidary at 06:04 No comments:

It started as it often does, with Vickie on a quest for knowledge. Actually, it is more an exploration, a voyage of discovery of possibilities, and she's been on it all her life.

"What would Peter be like if I could mold him completely in my image?", that sort of thing!

Vickie is constantly learning and taking in knowledge of anything and everything. I have often said she might die one day but she will NEVER grow old, as she is one of the youngest people I know, mentally.

Hence my entire married life has been lived in the context of a grade 8 science experiment and I have often felt that I might be one of the exhibits.

This time the subject was inks. She often uses them in her art and wanted to explore the possibility of making her own.

Step 1 was to scour the Internet for info which led her to the idea of making ink from acorns (as opposed to oaks). Thus the experiment began.

The first phase was the gathering process, which was made exponentially easier when we discovered that our friends, Dan and Lucie, were sitting on a veritable ink mine of acorns. In short order we had several pounds of them. But, there was a bit of a problem in that all she wanted were the caps, and so we drifted into acorn Processing phase, where caps were separated from the acorn via a rubber mallet and pulverized in the kitchen Ninja (which, by the way, made a heck of a noise!).

Then we entered the Extraction phase. This was accomplished by dumping the cap particles into a stainless cookpot along with a couple of rusted nails (for added flavour) and a bit of vinegar plus a small bunch of cloves to preserve the batch, along with copious amounts of water. This witch's brew then had to simmer for 3 days and, since it gave off a rather pungent odor, what better spot than in MY workshop??? Actually, while the smell was strong, it was not unpleasant.

Now we come to the next phase, Filtration. Using paper coffee filters (mine) and a filter basket (mine) and numerous plastic containers (also mine), the pulp was extracted.

Now the big moment! Would it actually work as ink??? We dipped a piece of paper (mine) into the concoction and voila!
At this point we knew that the fluid we had obtained would colour paper, so now the question was, could we concentrate the colour? To do this, more boiling was necessary to evaporate excess fluid. The original strip is sitting, half covered, in a window (blocking MY view) in order to test light fastness. Finally Vickie was satisfied with the consistency and colour and it was time to test it to see how it reacted with watercolours. 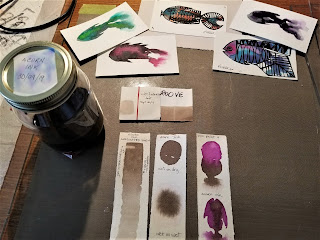 The test strips are at the bottom and as can be seen, the colour has darkened and it makes a beautiful graduated wash, lifts almost entirely (apparently this is a good thing - she says she still needs to add gum arabic - I don't know why she couldn't just use Canadian gum, but apparently this stuff is the ink equivalent of  "eye of newt"), makes a lovely edge (she says) wet on dry (???) and spreads fabulously wet on wet (more????). Also, it interacts with watercolour perfectly!

So the experiment appears to have been a total success, and I can look forward to many more brewing vats appearing in my shop in the future.

When all is said and done, she ended up with about 3/4 cup of ink....I now understand why others charge $18 for a small bottle! Incidentally, if you want to check out her earlier experiment using the rock sludge from my lapidary shop to make watercolour, check out the earlier blog post.

Of course, this isn't the final destination. The voyage of discovery continues and where she goes next is anybody's guess, but when she gets there, it will be on the blog, so stay tuned.
Posted by Peter Turner, lapidary at 05:51 1 comment: