A while ago, I had a bit of surgery done on my chin and the doc told me to stay away from my machines for a bit but after a follow up visit, I'm good to go again!

So this morning I cut several pieces, mostly to define and cut out shapes for cabs that I will work on over the winter.

This piece is from a beach so we really have no way of knowing where it originated but since I have a drill core of the same material from a site nearby, I'm pretty sure it is local. Here's how it looked on the outside. 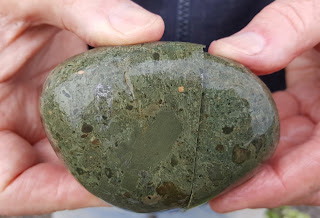 This is what's known as brecciated (broken) jasper and here is what it looks like on the inside. 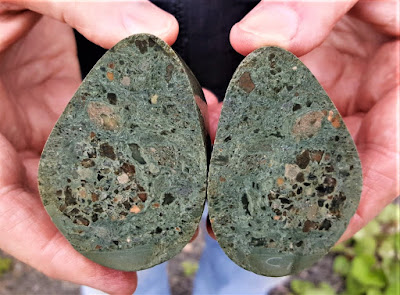 Pretty spectacular, huh? The broken pieces of jasper have been re cemented at a later date and in the process, small cubes of pyrite have formed. They show as shiny gold shapes in the picture.

And if you think that looks good, How about this? Recently, a friend brought me a piece he had found while exploring his property "somewhere" on the neck. He is a fellow lapidary from Arizona and has given me some amazing slabs of petrified wood so since he has no equipment here (bring a saw on your next trip Glenn) I offered to cut it for him. The patterning on the outside looked "interesting". 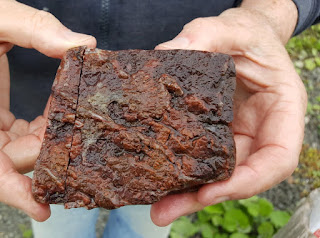 But I must admit that I wasn't prepared for what lurked inside. 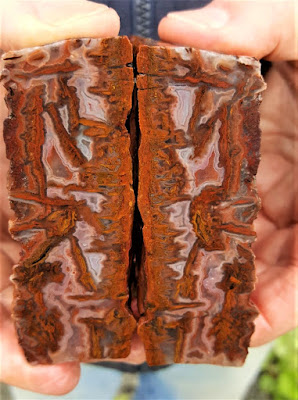 This is called "fortification agate/ plume agate" and it is one of the most amazing examples I have ever encountered. Now I have to find a way to "liberate" it!! (heh,heh).

I am amassing some awesome material to work on over the winter and later in the fall but I also have some beautiful cabs I just finished to amuse myself with.

Man I LOVE cutting rock!
Posted by Peter Turner, lapidary at 08:26 No comments:

It has been extremely busy around here in the last month so it's time to fill some of the empty spaces.
This ring is a beautiful piece of local agate, found as rough rock and cut and finished in my rock lab.
Here's how it looked at the start: 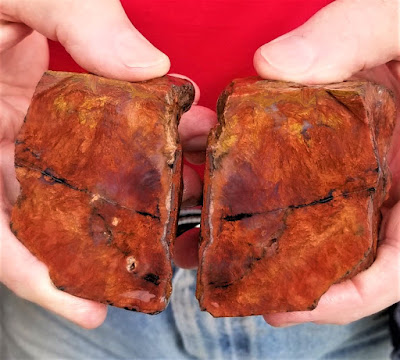 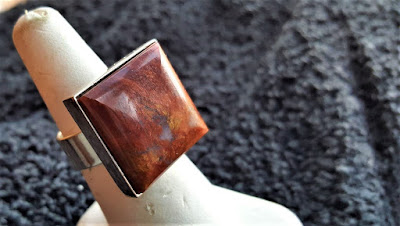 I set it in an adjustable, size #7 Amati silver plate bezel. The stone is 2 cmX 2cm. and has a beautiful clear section in the midst of some beautiful golden red plume patterning.
Lots more to come so stay tuned!
And if you are in the area of Digby Neck, come on by and say hi!
Cheers.
Posted by Peter Turner, lapidary at 10:20 No comments:

Summer on The Neck

We are in an extended period of beautiful weather finally and this was the view from our deck this morning. 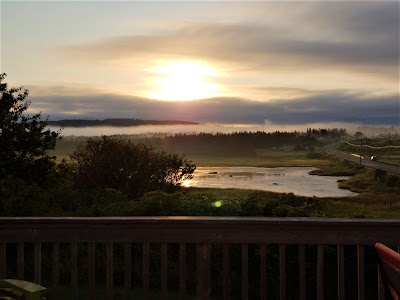 The great Blue Herons are still around and very often we will see one or more out there catching breakfast.

The shop has been really busy of late and I am in the process of finishing some cabochons to fill some of the empty displays.

In my last post, I showed a couple of local rocks that I had cut. Since then, I've cut some slices and Vickie has created some shapes and I have begun to finish them and I must say, it is beautiful material. The first one I did was to fit in an empty silver plate ring bezel I had. In this picture I show it in the bezel but I still have to grind a bit off the back to even it up and then I will raise it up so it sits more outside the bezel but I think you can see the beauty of this stone. It is a local plume agate and it polished like glass. I can hardly wait to work on the other pieces I have ready to go. here's the picture. 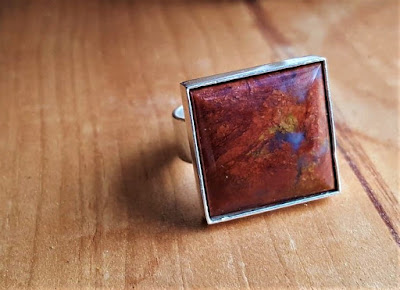 In a subsequent post, I'll take you through the whole process so you can see how a rough stone ends up as a piece of jewelry.

Cheers! And if you are in the neighbourhood, stop by and I'll be glad to show you both the store and my shop.
Posted by Peter Turner, lapidary at 06:22 No comments:

Why I Love Cutting Rock- Edition #647

To say the least, it has been a very unusual summer.

Right now, we are getting the weather we normally get in late June and tourism reflects this. Up until about three weeks ago, we had had few visitors to The Neck but since then, it has been very, very busy.

Vickie has been in her studio most days working on what she calls "mark making"- basically experimenting with the use of various items to make paint and ink marks on paper- you know- the kind of stuff you did in kindergarten (heh,heh). But she has been able to bring me a few treasures and recently I got the time to cut a few. She has a real knack of sensing when a fairly mundane rock will look amazing on the inside and here are a few examples. 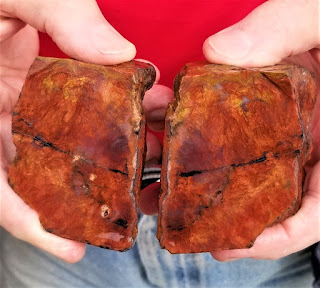 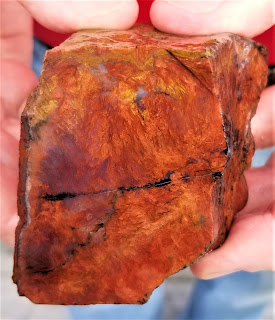 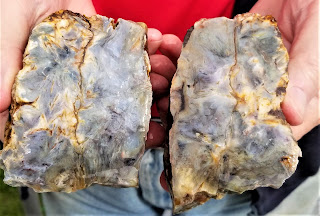 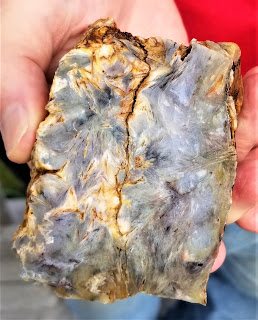 From here, I'll be cutting some slabs, defining some shapes and grinding and polishing some cabochons for next year's jewelry. Hopefully, I'll post some pics later in the fall.

I have had the pleasure of meeting some amazing people over the last little while including a very special couple from Florida. When somebody gets out of their vehicle wearing a Florida Gator t-shirt, I know I have met a kindred soul.
Cheers Earl and Rosellen! I'll be thinking of you in a few weeks when we kick off vs. Miami!
Go Gators!
Posted by Peter Turner, lapidary at 11:52 No comments: