Treasures of the Far East (Coast of Canada)

Here in Nova Scotia, especially on the shores of the Bay of Fundy, we are blessed to be able to find beautiful agates.
Recently, we have been working with material from Mexico but now we are back home working with some beautiful local agate from the North Range.

It's called Straw Agate and it is formed by the agatization of small tubular structures (probably straw) that have found their way into cracks in the basalt, producing this amazing pattern. This piece is called "Straw Dreams". 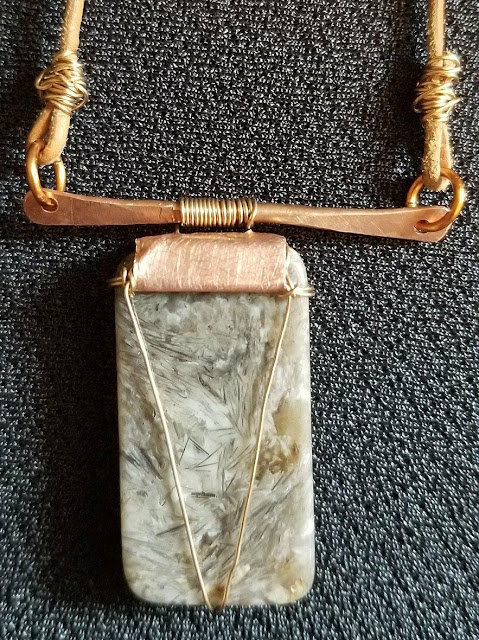 It is about 2 cm. x 5 cm.and shows the unique and beautiful patterning of the stone. The setting is entirely hand made in copper and it is wrapped with brass wire. The copper clip at the top has been wire brushed for texture. 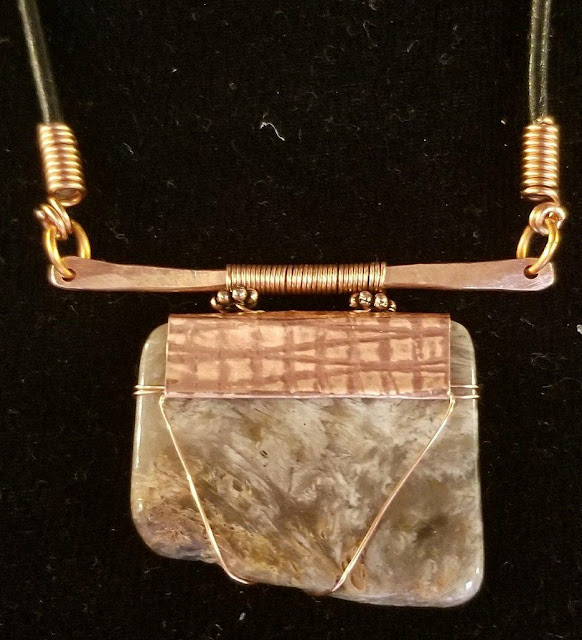 Again, note the amazing patterning. In this case, the copper clip at the top has been textured by running it through the rolling mill we got from John Hood at Scotia Gems (thanks, John!!). As with the first piece the setting is totally hand made as are all the findings but we added a manufactured copper clasp and copper beads. The ends of the copper wire wrap are tucked neatly into a channel in the copper clip.
We are featuring copper in a lot of our settings recently because it is easy to work with and really goes well with the rock we have been using. Plus, I have to try and use at least a small bit of the copper wire, sheets and findings that Vickie has stashed up over the years! lets just say we have 10 of EVERYTHING!

Finally, I'd like to show you a pic of a piece we featured in an earlier blog being worn by the new owner.

It was so nice having Seonaid, a fellow Nova Scotia Rockhound visit the shop and become our first customer of 2018! She even signed the guest book! And as a die hard Boston Bruins fan I have to admit that the piece even looks good on that red background!!
A similar pendant is on its way to a customer in Florida as soon as I get to the post office tomorrow. Hopefully, she'll send a pic or two so we can show that one off as well.
Digby Neck is expecting a big storm on Tuesday but after that, the outdoor sign will go back up and we'll be in business so if you want to spend some time browsing some very interesting stuff, come on by!
Posted by Peter Turner, lapidary at 09:22