Most of the time, I show you the "after"- the end result of rocks that have been cut, ground, polished, drilled and set but today I thought I'd show the "before"- what they look like at the beginning, before I have even scraped off the barnacles.
It's misty rain and foggy here today but yesterday was beautiful so "She Who MUST  Be Obeyed and I went on a little rockhounding expedition.
At one point we found a few large boulders with some really nice vein material and this was both good and bad news since I then had to go back and get a 20 lb. sledge hammer But I have to say it was worth it. Here's a bit of what we came back with.

This is a nice piece of agate showing plume and fortification characteristics. There will be even more detail when it is polished.

This is amethyst that was sitting as a face on top of a beautiful agate seam. 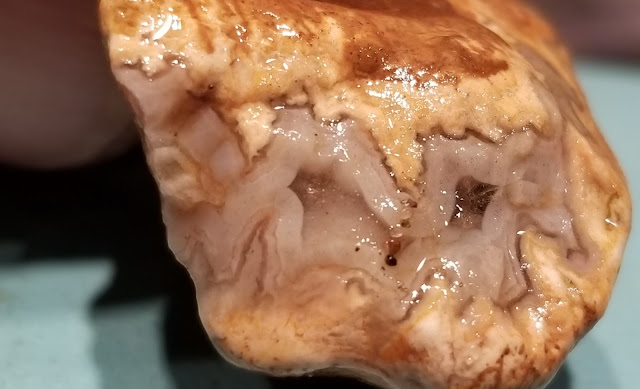 Some really nice fortification agate that will make an amazing pendant when finished. 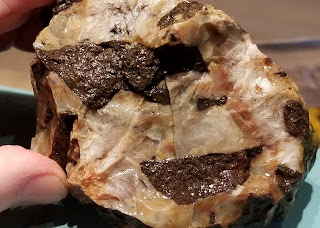 This shows you the power of tectonic forces.The black rock (an igneous rock called basalt) has been shattered by some force and the spaces filled with a mineral called stilbite which later has been partially replaced by agate. 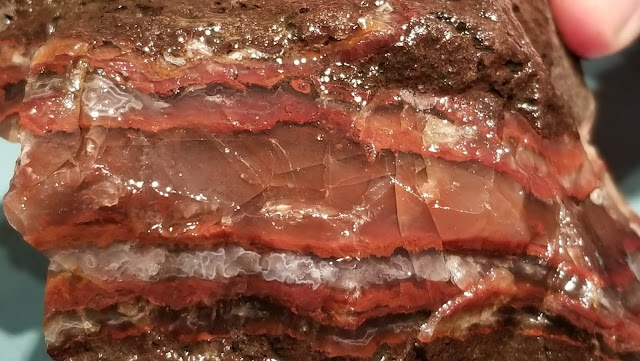 This is an amazing seam that includes fortification agate and possibly some carnelian. It will polish up like glass!

Lastly, a huge chunk of what appears to be straw agate. If so, it will show some amazing patterning when it is cut and should polish up really well.
All this rock was found on Digby Neck so if you are looking for a place to find some really interesting stuff, come on down! And if you do, stop by the VT Rock Shop at The Artist's Mark and see how this material is transformed into a beautiful end product.
Posted by Peter Turner, lapidary at 08:46