Well, the new toy has arrived and after regrettably divesting myself of a few other toys, I now have space for it in the shop. I am not going to post a "How To" video since there are good ones on You Tube and the Hi-Tech web site but if there is interest, I might do another post showing how I use it to shape cabs. In the meantime, here it is "in situ" as we geologists say: 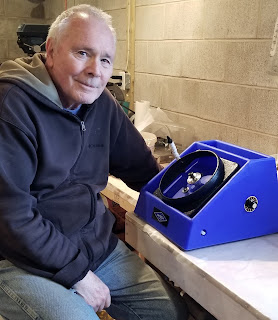 One thing I am going to show you is a trick I came up with for centering the diamond laps and pads perfectly on the backer plates since they have to be assembled. I was pretty worried that I might screw it up and get it off centre so I came up with a foolproof plan. Actually, since it worked perfectly for me four times in a row, we can probably upgrade that to idiot proof!
The backer plate has a hole and I started with a wooden dowel that was just slightly smaller. I am pretty sure it was a nominally half inch dowel but my caliper said it was exactly 0.43 inches. I then used black electricians tape to build it up until it fit snugly in the hole but didn't need to be jammed. This turned out to be a diameter of 0.48 inches. I had previously cut it to be about 2 inches long and here it is: 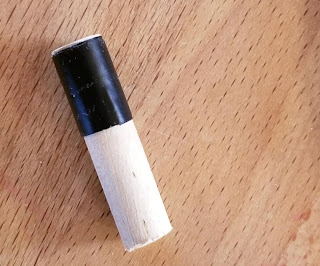 I then placed the backer plate on a flat surface with the face to be bonded to the lap pad facing up. 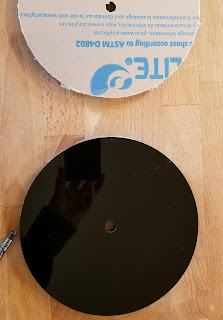 I placed the dowel in the hole and then cleaned the plate using a clean soft paint brush I stole from my artist/wife (who, hopefully, will never read this). 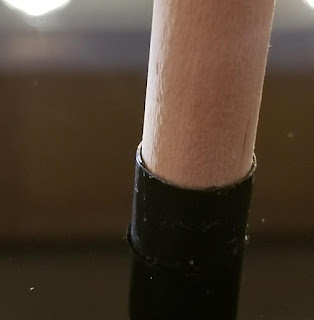 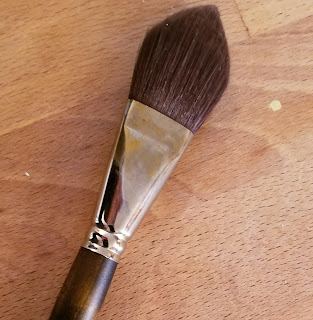 After taking the backing paper off the glued side of the pad, I applied pressure at two points on the edge to create a slight "U" shape. 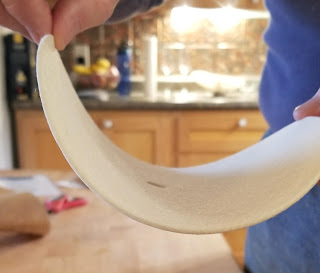 And then I slowly lowered it down onto the dowel until the lowest part of the pad was touching the backer plate and pressed it down, working from the centre out. 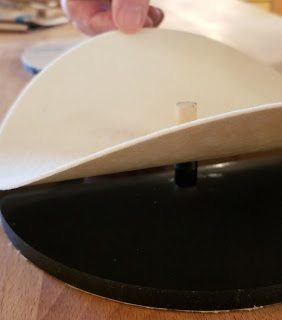 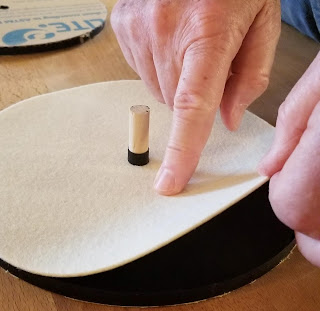 In each case, my pad was slightly larger than the backer pad but the excess was perfectly uniform so will not be a problem. The holes match up perfectly.
For those of you who might want to add the foam pad as a cushion, I tried using the dowel to locate the hole properly (there was no hole on my pads). I simply put the cushion pad underneath a backer plate, put chalk on the end of my dowel and lowered it through the hole until it made contact with the foam and then turned it about 90 degrees. When I removed the dowel from the hole, the result was a perfect chalk circle which I could then cut with an exacto knife.
I hope this is of some use to someone and will shortly be showing you the results from this machine. But I also want to say a few words about the machine itself. First, every aspect is sturdily built. Secondly, since I will be doing a lot of cabbing on it, it was important to me because of my leg problems that I could sit comfortably and be able to see the stone from the side when shaping. The 8 inch Hi-Tech slant lap is perfect for me on both counts. If I could improve it in any way I would increase the size of the water reservoir. I will do so by dripping water into the reservoir from my own home built water tower. Also, I would include a holder for the Allen wrench as I had on my last lap so it had less chance to disappear.
And one disclaimer, I am not associated with the manufacturer in any way and, unfortunately, paid full retail for my unit.
But it was worth every penny!
Message or email me if you have any questions or observations and if you happen to get lost and end up on Digby Neck in Nova Scotia Canada, stop in and I'll show you it working in person!
Cheers.
Posted by Peter Turner, lapidary at 09:05