The Rhodochrosite Has Been Cut!

In my last post I showed a chunk of rough rhodochrosite that I picked up Monday. Yesterday, I mounted it to a piece of 2x4 so I could cut it and after letting it set overnight I was able to put it on the saw this morning. Here is the result. 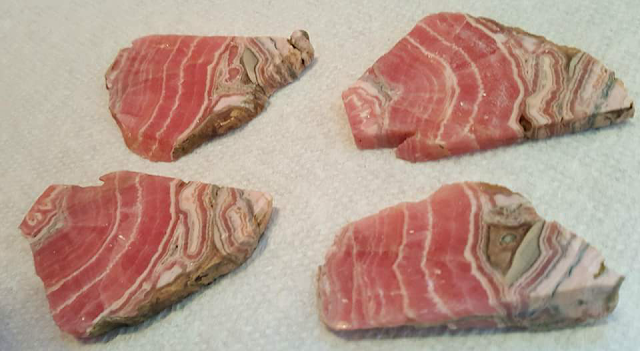 Even before it has been polished you can see the vitreous lustre (no that's not a typo- that's how we spell it here in Canada). I had to cut the slabs a little thicker because the stone is quite a bit softer than the agate I normally work with. Agate has a hardness of 6.5-7 while this is 3.5-4, close to calcite and flourite.

What really stands out, apart from the lustre, is the beautiful linear design which is a product of how and where the stone was formed. Rhodochrosite is often found in veins associated with silver and I'm pretty sure this piece came from a silver mine in Argentina but the circular patterns are because this rock actually formed as a cave piller (stalactite or stalagmite) one drop at a time!
Rhodochrosite is sometimes called Inca Rose and is, in fact, the national gemstone of Argentina. It is sometimes referred to as the "Stone of the Compassionate Heart" which is probably why I identify with it so much, me being such a compassionate individual and all, (heh,heh).
So what happens now?

Maybe it will inspire Lisa to introduce a new colour of hand dyed yarn through Seawall Fibres (yes, that's how we spell fibre in Canada).

The stone in the lower right is a thin end piece and it will be cut about in half and shaped as per the instructions of "She Who MUST Be Obeyed. The other three pieces will be turned over to her as well and she will decide how she wants them cut and shaped. I can tell you this- we're going to get some beautiful pieces in the end and I'll try to post follow up pics as they become available.
Posted by Peter Turner, lapidary at 06:36