Jewelry Production Back in High Gear

Well, the weather is definitely changing. Have had the wood stove going for about a week but although we had a bit of sleet a few days ago, so far no snow.
These are the perfect climactic conditions to make jewelry... indoors... in a cozy studio.
Vickie has agreed to take me on as an unpaid apprentice and I have learned a bit about the basics of wire work. Let me make one thing clear- I am not allowed to do anything creative! I am what's affectionately known as a "grunt" or "gofer" depending on the situation. So for the last few days I have been cutting copper wire into lengths to be used to make clasps, and then I have learned how to make the two clasps. Here is the result of my labours: 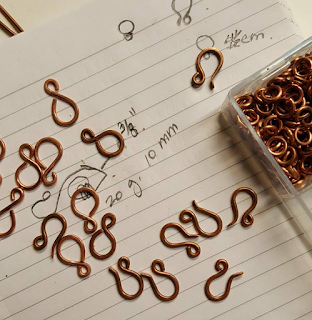 I have also become proficient at cutting the "jump rings" shown in the upper right corner. All of this is so that my "sensei" can do her thing.
She also had a few things to make first (since I am not allowed to control anything that is on fire) so here she is making some copper pins using a blow torch. 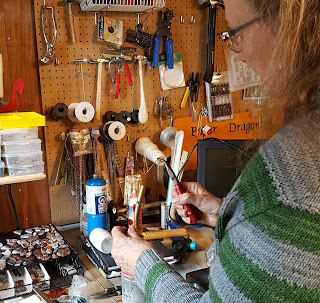 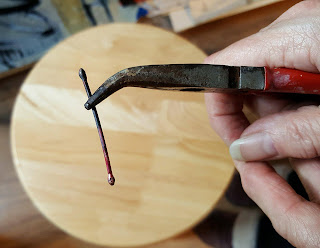 Vickie and I both prefer  interesting stones such as agate over classic gems and we both feel that any setting should add interest to the stone and not overpower it so in this case, since we started with a fairly large piece, a little bit of copper was only going to make it better.  Vickie started to work her wire magic. 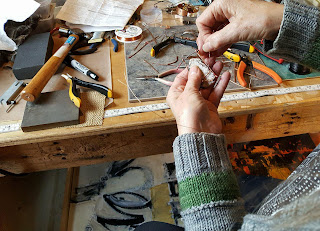 And here's the result. 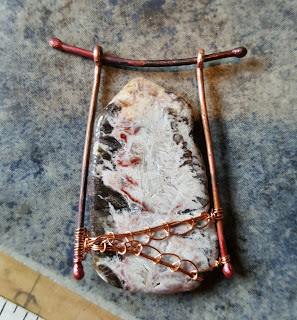 The rock, by the way, is local and appears to be a vein of stilbite that has subsequently replaced by agate, framed in basalt. Never seen anything like it and probably won't again.
She felt that Greek leather would be the perfect "chain" for it and now we are just waiting for the new owner to tell us how long she wants it. 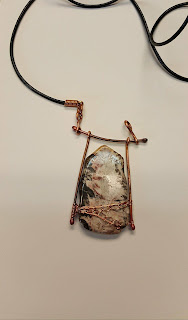 In the days to come, I'll be posting pics of what comes next so keep checking 'cause you will see some really interesting stuff.
Posted by Peter Turner, lapidary at 11:02