A Tribute To Don Ashbee

I was watching some match play golf on the weekend and it got me reminiscing about some of the interesting people I had played golf with back in the day. One stands out in particular- Don Ashbee.

Don was (he died a few years back) a truly unique individual. At one point a writer referred to me as an undersized overachiever but I paled next to Don- who was smaller and achieved a heck of a lot more! He had professional careers in hockey and lacrosse and in fact he is in the Canadian lacrosse Hall of Fame. 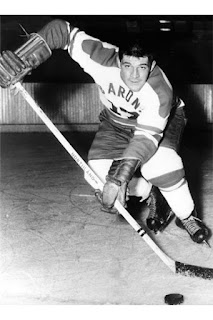 But his achievements were nothing compared to his personality. Don loved to talk more than anything in the world except for his wife Dorothy, and boy did he love her! Basically, Don couldn't keep quiet. I told Vickie about Don's habit of chattering away at his opponents while playing lacrosse and getting on their nerves. Truth is, he got on everybody's nerves- so much so that 5 minutes into a game, everybody wanted a piece of Don- including his team mates!

Vickie didn't believe me (she loved Don) until the day he delivered the firewood. Don called because he heard I had hurt my back and wanted to know if I needed wood (I did). Next thing I know he shows up with his little truck filled- not just with wood but the best- fir and arbutus! After he unloaded, he came in for a coffee and was looking at Vickie's abstract paintings hanging on the walls. He looked at several and then turned to Vickie and said "I guess this is how you have to paint if you can't draw, huh?" I roared and said to Vickie "I told you. Join the club!"

Don was a gifted after dinner speaker who could keep you listening forever to his tales and jokes- some of which would get him "cancelled" today in a heart beat. I also heard a constant stream of them as we drove around the golf course. Here's a couple.

We were playing at a different course (Nanaimo) and an elegant woman member approached (not uncommon since everyone knew Don). She said, "You don't remember me do you?" to which Don replied, "Of course I remember you- room 6 at the motel, but I paid you!". The funny thing is, the way he said it with that twinkle in his eye caused her to laugh her head off as did we all. Don could get away with anything.

Then there was the day we were waiting to tee off with Harold Fox, another lacrosse buddy. He said to me, "Look at Foxy over there. When we played lacrosse he wanted nothing better than to give us the business. But now look at him- just another tired old man". And then he added, "But I still wouldn't turn my back on him!"

I heard Don speak at many celebrations of life and he was perfect because he did just that- celebrate their life and make people laugh at the same time. I'm just sorry he won't be around to do mine although I'd hate to think of the laughs I'd be missing!

Don was a throwback to a time before computers so while he had one, it was pretty much a mystery to him. I was the club captain at our golf club when we switched to computers to input ours scores to calculate our handicaps- the strokes players are "given" to make matches between players of differing abilities fair. Since Don could never figure it out, he simply called me and got me to do it. Now over the years, I have found that many golfers cheat on their handicaps- most to get a competitive advantage by putting in a higher score but a surprising number by putting in lower scores and thus cheating themselves (ego I guess). But Don was totally different. Here's how a typical call might go.

I got a 6 on #1 but I didn't really try on the putt so give me a 5. On #2 I made 4 but I sank a really long putt that I'll never do again so give me a 5. On #3 I took the wrong club by mistake. I hit a six iron that I thought was a nine so give me a 7 instead of 8. And so it would go through the round. Don's handicap was based on what he thought he should have scored!

It would actually be impossible to explain Don to a young person today since his breed vanished some time back. But I'll just say this. If you had a whole country of Don Ashbees, you'd have one heck of a country! And if you played golf with Don, win or lose you had a good day!

Posted by Peter Turner, lapidary at 12:25