The Best Thing To Come Out Of Australia

So here's the beer lover's dilemma.
The doc says no more than one beer a day.
Here's your solution.
I proudly present to you The Darwin "Stubby" 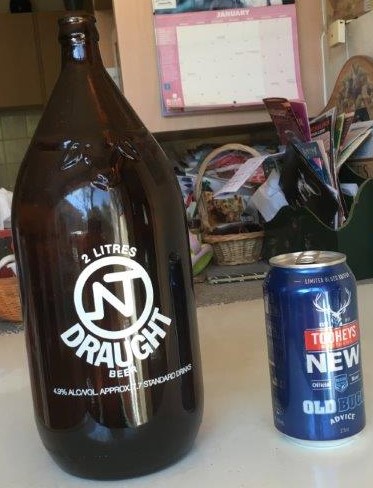 Yes folks, your eyes are not deceiving you. That is 2 full litres of pure beer drinking pleasure!
OK so Sapporo has one too but then you have to drink Sapporo.
Just look at it standing proudly along side a "normal" can of Tooheys.
So the next time you tell "She Who MUST Be Obeyed" that you are just going to stop off and have a beer with the boys, order this bad boy, come home four hours later and pass the polygraph test!
Actually, the Stubby was phased out in 2015 and a wake was held to commemorate the sad event.
Here's an account:

The wake commemorating the life and times of the Darwin Stubby was held at an Alice Springs steak house.
Restaurant owner Wayne Kraft said he was holding the event because, "Darwin is still in mourning".
Mr Kraft said he was encouraged to hold the wake by former Northern Territory administrator Ted Egan, who is famous for turning empty beer boxes into musical instruments.
"It is a sad day so we'll shed a tear in our beer, and Ted's going to reminisce and maybe sing a few songs," Mr Kraft said.
Mr Egan said the Darwin Stubby was a great tourism device, and he often took one along on official visits to promote the Territory.
"It's sad that it's gone but life goes on, and it was one of the great means of attracting people to the Territory," he said.

PHOTO: Former NT administrator Ted Egan asked for a wake for the Darwin Stubby. (Flickr: Jan Smith)
"It was all about just slow drinking and a lot of chats.
"Drinking is really supposed to be convivial, with lots of food and laughter. That's the old style."
A slow cooked 43-kilogram leg of central Australian camel was being served with the last remaining bottles of NT Draught.
The Humpty Doo Hotel, 50 kilometres from Darwin, used to hold an annual Darwin Stubby drinking competition featuring Norman the Brahman bull, who held the record for the fastest scull of the giant beer.
According to ABC News reports from 1988, Norman once sculled a 2.25 litre stubby in 47 seconds.
At the 1988 competition Norman was reported have washed down his stubby with "half a dozen tinnies and a meat pie".
Posted by Peter Turner, lapidary at 07:13