A big part of The Artist's Mark is that we are the only retail outlet for the now world famous Seawall Fibres hand dyed yarn. Each year, daughter Lisa (AKA- The Dyer) and Vickie (AKA- the Designer) head off to Vancouver for an event called Knit City.

Knit City is an event attended by thousands of rabid knitters and over the course of three days we sell several hundred skeins of yarn.

Last year, we introduced a product called the Sock Blank. This is a length of knitted yarn which Vickie "paints" with dye to create a piece of art. Here's one she did last year.

The knitter, however, starts unraveling the "art" and uses it to knit a pair of socks! Hence the name "Sock Blanks". Don't ask me to justify other than to say that knitters are, how can I put this in a nice way, CRAZY!

Last year they sold all they brought so this year Vickie is back at it with a vengeance. 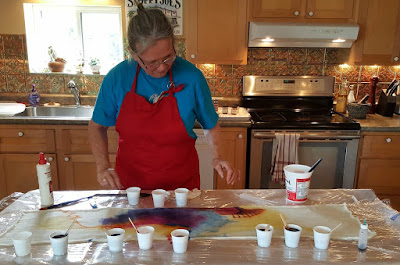 So this year they will be heading west with an even larger selection and after they get back I'm going to sweet talk Vickie into making some for the shop.

This year, however, the big unveiling will be of our new spokesperson- Knut The Knitter! Here is yours truly posing with him. 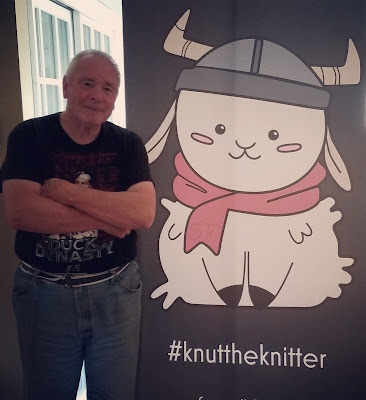 Knut will be at the booth and we are even going to have a contest for attendees who get their picture taken with him and we have a really nice enamel pin featuring Knut for sale. These will also be available in the shop after the show if there are any left. As you can see, we have tapped in to the Viking heritage evident in the popular Viking Shield Shawl that Vickie recently designed and released.

So if you are in Vancouver on the weekend of September 29th, stop by the booth and get your picture taken. And if you are a local who comes by to buy yarn, you might want to hold off next week because a lot of our stock has already been shipped out there.

And while Vickie has been painting, I've been working on some jewelry pieces that I'll feature in an upcoming blog.

As always, if you get lost and find yourself on Digby Neck, stop by and say hi. The weather is still warm and visitors are telling me that the whale watching is really good!
Posted by Peter Turner, lapidary at 11:54