We Have a Rolling Mill!

Apparently, I have been living my life in blissful ignorance, unaware of the huge void that existed. That has been rectified, however, as we now have a rolling mill!

"And, more importantly, why do YOU  feel the need for one?!", I also hear you ask.

As many of you know, we make jewelry from the beautiful jasper and agate we find locally. Actually, I misspeak. Vickie makes the jewelry in her magical studio next to the shop using copper, silver and other metals to create settings for the stones.
For some time, she has been telling me she could really use a rolling mill. Now rolling mills come in all sizes from hand turned bench models to those huge machines used in factories. But even the smallest examples are not cheap! Try looking for one on EBay and you will see that you are looking at several hundred dollars, possibly even thousands for a more automated version.
Recently, we were visiting John and Nancy Hood in Yarmouth. John does beautiful lapidary and creates stunning settings and all our really high end pieces come from him. He and Vickie are similar in several ways- they never throw anything away and they have at least one of everything in their "lairs". So when I mentioned that I was in the market for a rolling mill, it didn't take me by total surprise when John said he might be able to help. A few minutes later he was back with "The Beast" and a deal was made.
At that point I had a rolling mill that couldn't roll. It had no handle and the cogs were not being held in place. Fortunately, I have a friend who does welding and he attached the handle from a hand auger and secured the cogs. There was, however an important piece missing. On the top, there are two screws that you use to raise or lower the heavy rollers. Naturally, you want them to be positioned so that the space between the rollers is consistent and so ideally, you want to move them both the same amount for each pass. To do this requires a little effort so each screw has a slot in the top for a 5/16 inch Allen Wrench. Do you have any idea how much these wrenches cost? The best deal I could find was going to cost me around $20 but then a very rare thing happened.
Do you ever go to Canadian Tire or any store and see that they have an unbelievable price on something that you either don't need or just bought? Sometimes the price is so good that you wish you needed one just so you could buy it. Well, on the CT web site they showed that a set of Allen wrenches, including the one I needed, was reduced from $17.95 to $4.95 and better yet, there were two in Digby! So for $10 plus tax (paid entirely with my $ millions of accrued Canadian Tire money) we were in business. I give you "The Beast"! 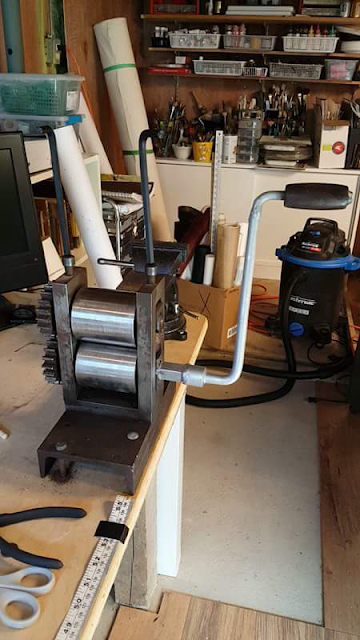 As you can see, I have bolted it to the bench ( a bit of overkill in light of how much this thing weighs- I estimate about 50 pounds at least. The two "ears" sticking up are the Allen Wrenches and as you can also see, Vickie's studio is, as it always is- a mess!
So now to answer the question of why it is needed. Actually, you can do a lot with this thing including:
1. Flattening metal wire.
2. Making metal sheets thinner.
3. Creating a pattern or texture in metal by passing it through with anything patterned, even a piece of
cloth.
4. Flattening a metal coin, thus making it worthless and I think, breaking some law. I'm a bit of an
anarchist.
5. Acquiring a hernia carrying it from the car to the studio.

This thing is definitely going to change my life!
In the upcoming months, I will be posting pics of some of the pieces that my jewelress is going to create so stay tuned!
Posted by Peter Turner, lapidary at 04:42