Have you ever wondered where that expression originated?

As with all the truly great things in life great things (curling, single malt scotch, golf) this phrase was born in Scotland. By the way, did I mention that I also originated from there so we should probably add that to the list. In fact, I have actually acquired three square inches of the peat bog used by the Laphroaig Distillery- an investment that nets me a dram of whisky a year in "rent"!

Scots love a wee dram and many prefer it chilled. Winter drinking presented no problem as half the time the drinker was lying in a snow bank to begin with so chilling ingredients were "at hand" (and at foot as well I guess). But even in Scotland, there is a very brief period called, laughingly, "summer" and here is where innovation was needed in the days before refrigeration and readily available ice.

Those canny Scots came up with a brilliant idea- go down to the nearest ice cold stream and grab a few cold rocks from the stream bed. Plunk them in your glass and you were in single malt heaven. Inns would gather some each evening and so the idea of ordering a drink "on the rocks" was born.

Later, ice replaced the rocks but the expression remains.

However, although progress brings convenience, it does NOT always bring improvement! As ice melts, it turns into something called "water" and the effect is to dilute the potency of the beverage. This would not be a problem for most Scots as the drink is gone long before the ice has a chance to even START melting. But other cultures often linger over their tot so many people have gone back to using actual "rocks"

As a lapidary, this caught my interest and I have some cooling in the fridge at all times (just in case...). Recently, I shared a single malt with a relative and they apologized for not having ice so I set out on a mission to make him some of the good stuff.

Now, this is not as simple as it might seem. Some rocks are porous and so might suck up some of the ambrosia and that would be a tragedy. Other rocks could flake off, giving the drink a "gritty" taste and still others actually add a taste and if you're drinking single malt from Islay that would constitute what the Bible refers to as "a sin against the spirit (Matthew 12:31)

So you must carefully choose your rocks. For this attempt, I had the perfect starting material- a section of diamond drill core (a 1 inch "tube" of rock) that consisted entirely of  brecciated green jasper. I had enough for 6 "rocks so the first step was to cut it on my Hi-Tech saw. Here are the results. 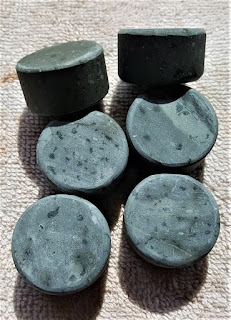 However, even after the edges had been ground slightly on my Cab King, there was still a chance that the edge could break the glass resulting in a loss of scotch and, well heartbreak!

So I threw them into my Lot-O-Tumbler with a load of regular rock and created the final product. 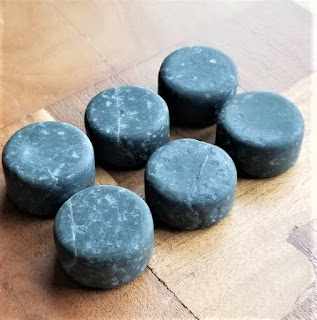 So while ice will be gone in short order, these babies will be around to cool drinks for millions of years!

Posted by Peter Turner, lapidary at 06:50