Solveig was a unique and amazing woman whom I was fortunate to meet through my wife's family. She, like they, was Norwegian and lived in Montreal, where she had a beautiful apartment downtown and a rural chalet in St. Sauveur that was straight out of the mountains of her home country. She was an impressive woman in many ways, having married five times and standing at least 6 feet tall with a truly striking appearance- in other words, she looked like a modern Viking.

But Solveig had another side. While very wealthy, she valued and enjoyed simple things and she especially admired intelligence and determination- two traits she had in spades.

In Montreal, there was an entity known as the Norwegian Seamans' Church and while ostensibly a church, it became the hub for all things Norwegian in Montreal, including the many Norwegian sailors who visited the port. At that time, many Norwegians were emigrating to Canada and my father-in-law, Thorleif, was one of them. He arrived in Montreal with little besides a dream, having left his wife and small daughter, Wencke behind until he could afford to bring them over. And that's where Solveig came into their life. She was an active benefactor of the church and tried to help get people established. She helped Thorleif and when his family arrived, showed them much kindness as well.

She took great interest in Wencke and even helped pay for her McGill tuition. She and her husband Larry shared Wencke's love of reading and especially science. And Solveig and Wencke both loved art and became accomplished artists. They shared another thing. Both had Norwegian names that Canadians found hard to pronounce so Wencke became (my wife) Vickie and Solveig became Silvia.

Solveig was an extremely accomplished artist and sculptor and it's a shame she didn't get to see Vickie's talent or this piece I created but I just know she would have loved it- both for its beauty and the fact that someone she knew had acquired the skills to make it. So I give you Solveig's Song. 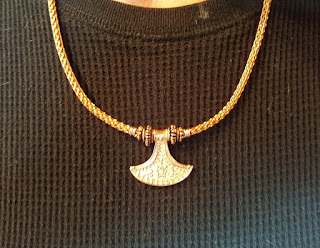 The necklace is made from a copper Viking Chain that I wove from 24 gauge copper wire and drew through a series of draw plates until it was 3 times as long. Then, in honour of this modern Viking, I hung a Viking axe charm framed by copper beads and spacers. 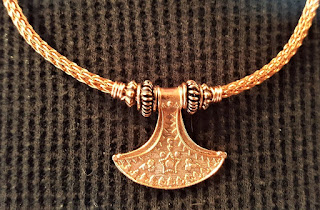 Finally, I finished it by adding lengths of metallic copper, premium leather cord (for comfort) and finished it with a hand made clasp. I can actually see Solveig wearing this and treasuring it as much as her diamonds and jewels because that is who she was.

Posted by Peter Turner, lapidary at 07:02