The Artist Comes Over to the Dark Side

Some of you may know that, apart from being an exceptional artist, my wife Vickie (AKA She Who MUST Be Obeyed- anyone who watched Rumpole of the Bailey will get it) is an avid rockhound.

This can pose problems for me because she is always bringing stuff to me to cut open for her. Consequently, the stuff I really want to cut gets put on the back burner. In the past, I have, to no avail, dared her to cut one herself but a few days ago, she finally agreed. The fact that she was taking over most of my shop with an experiment that will be the subject of a subsequent blog might have been a factor in her decision.

Anyway, after donning her professional Cab King apron which she insisted I modify to read Cab Queen, she was ready to begin. 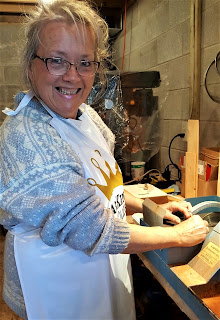 As you can see the smile is tempered with terror. Either that or she is trying to emulate Jack Nicholson in either The Joker or The Shining! And this is before the saw was even running!

So now the saw is actually running and she has started the cut. 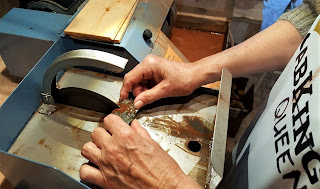 She has really good position but because of her basic blindness, she insisted that the blade guard be lifted and this is causing the nice vertical red brown line of cooling oil to appear on her new apron. And yes, it IS time to change that oil!

So now the rock has been cut. 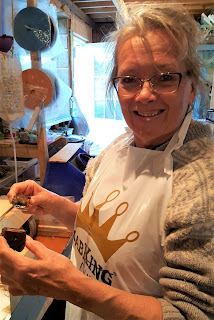 The smile is less manic and her heart rate has come down to the low three figures. She has yet to notice the stain on her apron. So now we have to go outside to the area where I hose down the rocks to remove the oil and after doing so, here's the result of her cut. 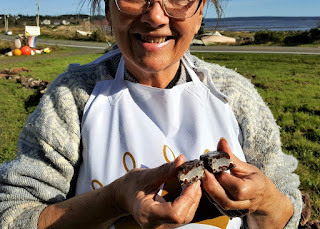 As you can see, her smile reflects the heart rate having now dipped below the century mark and I have managed to position her hands so she still can't see the oil stain. The rock was a piece of vein fortification agate surrounded by some chocolate haematite patterning and was actually worth cutting and now she wants me to cut thin slices to make a pair of ear rings! She actually did a great job. The cut was nice and straight due to even pressure on both sides of the stone and there are virtually no saw marks.

Will there be more lapidary work in her future? Only time will tell but she has broken the ice and I think will now feel more  comfortable with the machines!
Posted by Peter Turner, lapidary at 06:19