The Jooltool- A Preliminary Assessment

Like many others, I have difficulty working in my rock lab in the winter months. I have an industrial heater but can't leave it on when I'm not there so water tends to freeze and wheels don't turn like they should.
My daughter, Lisa, has used a machine called a Jooltool in her work with polymer and precious metal clay and since she is so busy dying yarn for Seawall Fibres she sent it to me to try because it can be used anywhere with no mess. Here's what it looks like. 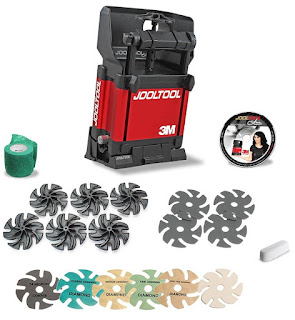 It is basically a rotating spindle to which you attach these "ninja" type wheels which vary in coarseness from about 100 to 50,000 grit. You work the stone from underneath the wheels but when they are spinning, you see the stone perfectly because of the gaps. here's mine set up on my bench. 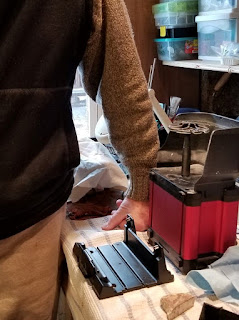 As you can see, it doesn't take up a lot of space. I worked on it for a few hours this morning and was surprised at the lack of dust, especially since you don't use a lot of water. And it doesn't make a lot of noise- perfect for indoors.
To test it, I took a stone that I had cut but not worked at all. 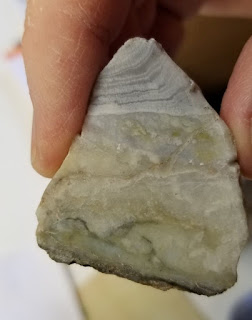 It still had a few saw marks in it so I started with the medium grinding wheel and took it through to 50,000 grit and then cerium polish. And while the stone had some flaws and I didn't spend a lot of time on it, here's the result: 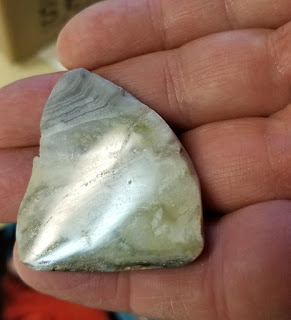 Honestly, I was pretty impressed! I also did a bit of shaping and it worked well. So then I tried it on a specimen piece that had previously been worked to 325 grit on my slant lap. Here's a video of the finished product.
So here's my assessment so far.
If you don't have much space, you could do a lot with this machine. The same goes for those who live in northern climates and can't work in their usual manner. It is a real advantage to be able to see the surface of the rock while it is being worked. The Jooltool isn't cheap- in fact, it's quite expensive. Buying the basic set up needed for lapidary will set you back $1300 Cdn. plus tax. But I have to say that if, like me, you have serious cabin fever and need to work on some pieces, I actually think it is well worth it. A lot of thought has gone into the design and it is incredibly well built.
So check it out on line and keep checking my blog because my next project will be to make a domed cab. As always, I'll be perfectly honest in my assessment.
And if you want to see it in person, contact me and I'll set something up.
Cheers

P.S. I am not a dealer for this or any other lapidary machine.

Posted by Peter Turner, lapidary at 09:32