I've decided not to bore you with all the chemistry but put simply, agates are beautiful! Some of the ones shown below are extremely rare- found in only a few locations near the Bay of Fundy!
By definition, agates are supposed to be banded but since some aren't, I'm going to give you my definition-
A microcrystalline silicate with some kind of a pattern. The pattern is caused by chemical variations of the silicate (impurities) which are mainly hematite (black, silver, red) and limonite (yellow, brown).
There are several types of agate but all are created in much the same way- very hot silica-rich liquid flowing through cracks in the basalt, cooling and precipitating out the silicate. The silicate builds up over a very long time until there is no more space.
Several different types of agates exist.
Fortification agate gets its name from the fort-like structures you can see.

Moss Agate is called that because of the plant-like structures it contains. Not all moss agates are green- they can be pretty much any colour and shape.

Flame Agate contains flame like structures that seem to shoot in from the edge. The flames can be red, cherry or golden (rare) depending on the impurities. We have all of these in the shop.


Plume Agate is kind of similar to the flame but the shape is more rounded. Again, it can be different colours and we have a beautiful piece of cherry just waiting for someone to use it as a pendant. 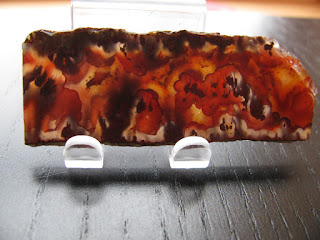 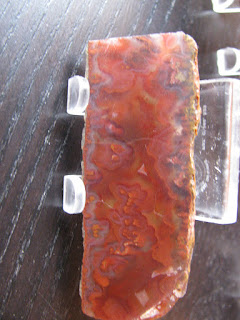 Crazy Lace Agate is the wacko member of the agate family. The matrix is usually white (chalcedony) and it contains really weird shaped designs in various colours. We have some beautiful slabs of this as well. 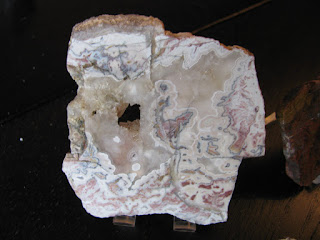 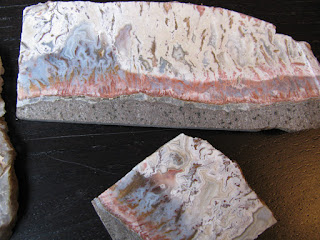 There are several other types but they tend to be variations on these.

In the shop, we have tumbled stones, slabs (for display or lapidary), cut display pieces and rough material. This rock is so beautiful, you have to drop by and see it.

Posted by Peter Turner, lapidary at 05:50